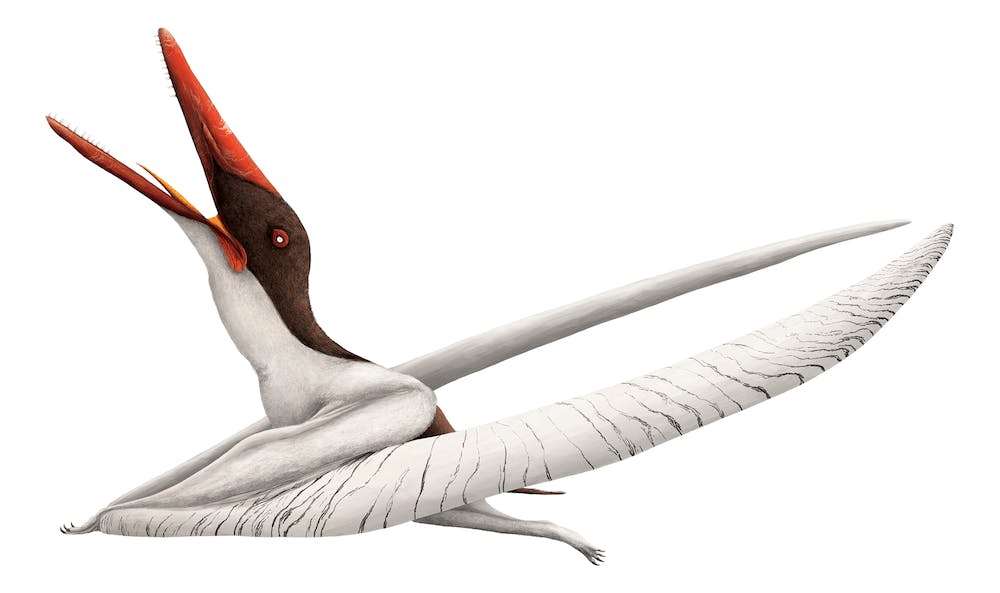 In 2019, Alexander Kellner and colleagues named a new genus and species of pterosaur, Mimodactylus libanensis. It’s known from a single, articulated, and largely complete skeleton discovered in the Upper Cretaceous rocks of the Hjoûla Lagerstätte of the Sannine Limestone in Lebanon. The genus name uses MIM, the acronym for the Mineral Museum of Beirut, and the species name honors the country of Lebanon.

The skull of Mimodactylus is largely present, missing the region around the eyes and brain. It was roughly triangular in profile, but had a broad, U-shaped snout, similar to ducks and istiodactylid pterosaurs. Mimodactylus had 11 pairs of teeth in its upper jaw, and 10 in its lower. The first pair of upper teeth were simple cones with sharp tips. All of the other teeth of the upper and lower jaws were also cone-shaped, but were elliptical in cross-section and bore a swelling at the base, known as a cingulum. They were widely spaced, but restricted to the front half of the jaws.

The wings are remarkably long and stout compared to the torso, giving the animal a wingspan of about 1.3 m (4 feet), but a torso around 15 cm (6 inches) long. Kellner and colleagues examined certain features of the skeleton and determined that the only known specimen of Mimodactylus came from a fairly young animal, but were unable to estimate adult size without more material.

Kellner and colleagues placed Mimodactylus into a phylogenetic analysis of pterosaurs and found that it was part of a major radiation of toothed pterosaurs in the Cretaceous. Mimodactylus was found to be most closely related to Haopterus, from the Lower Cretaceous of China in a lineage they named Mimodactylidae. Mimodactylids, in turn, were found to be closely related to istiodactylids at the base of a large lineage of mostly ocean-going, long-winged, toothed pterosaurs including Ornithocheirus and Anhanguera.

Mimodactylus was found in sediments formed in a shallow tropical ocean. At the time Mimodactylus lived, about 95 million years ago, the land that would become Lebanon was off the northern coast of the Afro-Arabian continent, south of the Tethys Ocean. Kellner and colleagues noted that the unusual teeth of Mimodactylus suggest a unique diet. They proposed that it specialized in crustaceans, and may have plucked shrimp and other nectonic arthropods.