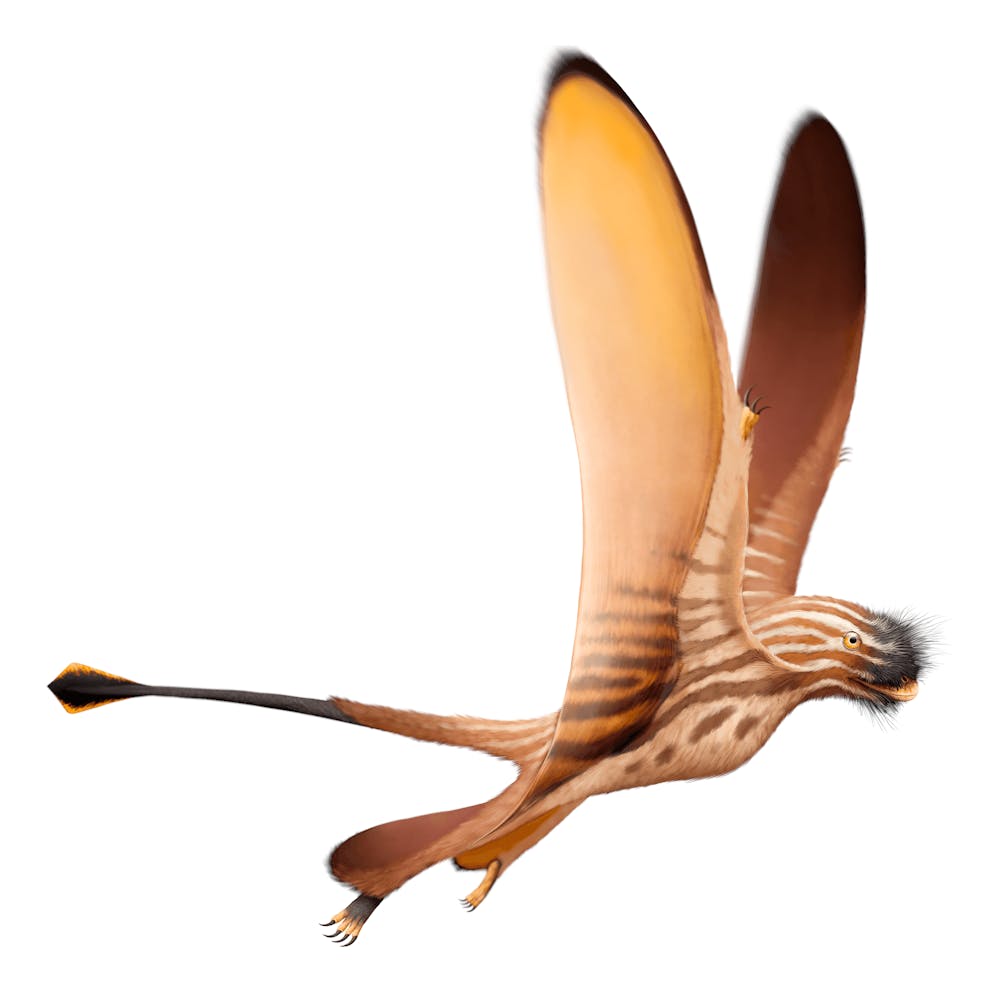 In 2015, paleontologists Xin Cheng and colleagues named a new pterosaur, Daohugoupterus delicatus, from Inner Mongolia, China. It’s known from a single, partial, articulated skeleton on a limestone slab made up of the rear part of the skull, neck, torso, and left humerus. The name refers to the Daohugou Beds of the Middle Jurassic Tiaojishan Formation, and the delicate nature of the skeleton.

The skull is only partially preserved, with the rostral portion missing from the end of the slab. It’s preserved with the dorsal surface up, and shows that the skull was unusually wide, and had unique anatomical details. Both the upper and lower temporal fenestrae were particularly small, and the caudal process of both the premaxillae and nasals deeply invade the paired frontals on the skull roof.

The neck is relatively short, even for an early pterosaur. The sternum of Daohugoupterus is triangular and is wider than long, more so than any other early pterosaur. Among the wing bones, only the left humerus, a proximal carpal, and pteroid bone are known. The humerus is just over 4 cm (1.5 inches) long, and bears a quadrangular deltopectoral crest, similar to Eudimorphodon and Campylognathoides, but longer than what’s seen in either taxa. A patch of skin from the base of the neck near the right shoulder shows that Daohugoupterus was covered in hair-like pycnofibers. Cheng and colleagues compared Daohugoupterus to a number of other taxa from the Tiaojishan Formation and beyond, and could not determine which, if any, family it belonged in. They noted that it is clearly not a pterodactyloid, but was also dissimilar from anurognathids, rhamphorhynchids, and wukongopterids. They noted the lack of the snout and any teeth in the specimen made it difficult to determine its closest relatives. Here at Pteros, we have reconstructed it as a long tailed pterosaur with a somewhat short snout.

Daohugoupterus lived in a lush, semi-tropical forest. Without any preserved teeth, it’s impossible to know anything about its diet and lifestyle, but its small size suggests that it may have fed on insects or other small terrestrial prey.