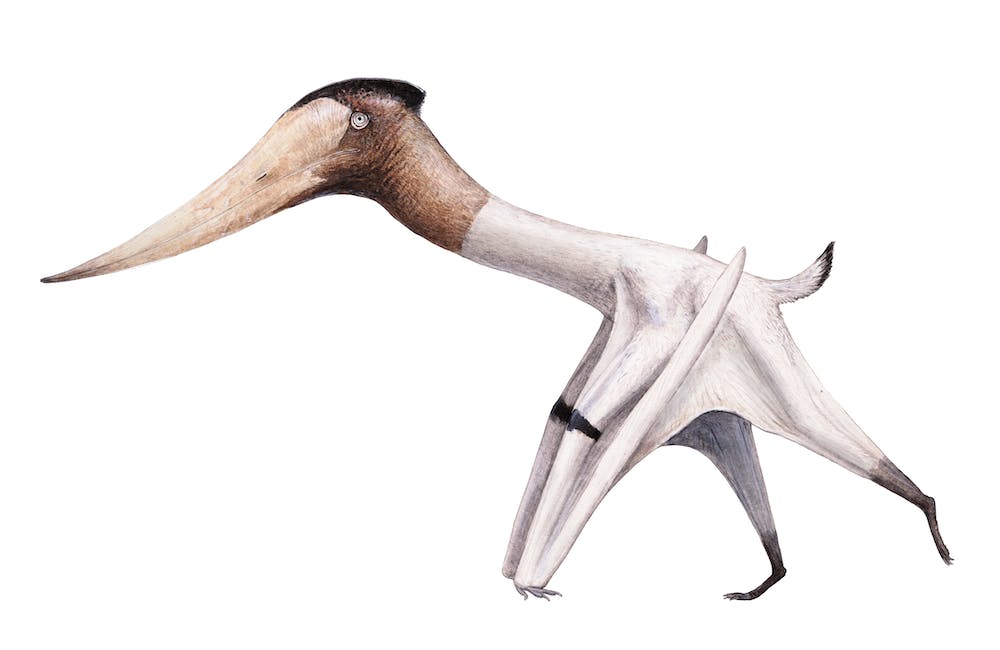 In 2017, paleontologists David Martill and colleagues named a new pterosaur, Xericeps curvirostrus, from the Kem Kem Beds of eastern Morocco. It’s known from a single partial lower jaw that is distinct from all other known pterosaurs. The name Xericeps translates to “dry catcher” a reference to the Sahara Desert and its forceps-like beak. The specific name means “curved snout.”

Xericeps is known only from a partial lower jaw from the symphyseal region, missing the tip. Although the fragment is incomplete, it’s distinctive and unlike any other pterosaur. The fragment is about 17 cm (6.5 inches) long and 2.5 cm (1 inch) tall. It’s toothless, and has a texture indicating that it was covered in keratinous beak tissue. When complete, the entire skull would probably be about 70 cm (28 inches) long.

The jaw is narrow and tapering, and when seen from the side the tip appears to curve upward. There are five small openings for nerves and blood vessels on the side of the jaw, parallel to the lower surface. The underside of the symphysis has a long shallow groove, a unique feature among pterosaurs. The upper surface of the lower jaw has a wide but shallow depression. Although no other bones in the skeleton are known, its wingspan can at least be estimated to be around 3.5-4 m (11.5-13 feet) by comparison to similar pterosaurs.

Martill and colleagues compared Xericeps to a number of other toothless pterosaurs, noting similarities and differences in specific anatomical features as well general shape. They found that it was most similar to the azhdarchoids like the thalassodromids, chaoyangopterids, and azhdarchids. They suspect it might be most closely related to Alanqa, also from the Kem Kem Beds, and that both are azhdarchids. Unfortunately, they couldn’t say more about that hypothesis due to the incompleteness of the material.

The Kem Kem Beds were deposited 95-100 million years ago, at the beginning of the Late Cretaceous. Xericeps lived in a hot subtropical floodplain with braided rivers, deltas, and ephemeral lakes living alongside several other pterosaurs known just from fragments, giant theropods like Spinosaurus and Carcharodontosarus, and the strange sauropod Rebbachisaurus. Martill and colleagues were unable to say much about its diet, but its closest relatives were predators of small land animals, so it’s probable Xericeps was too, although it may have fished like some other toothless pterosaurs.