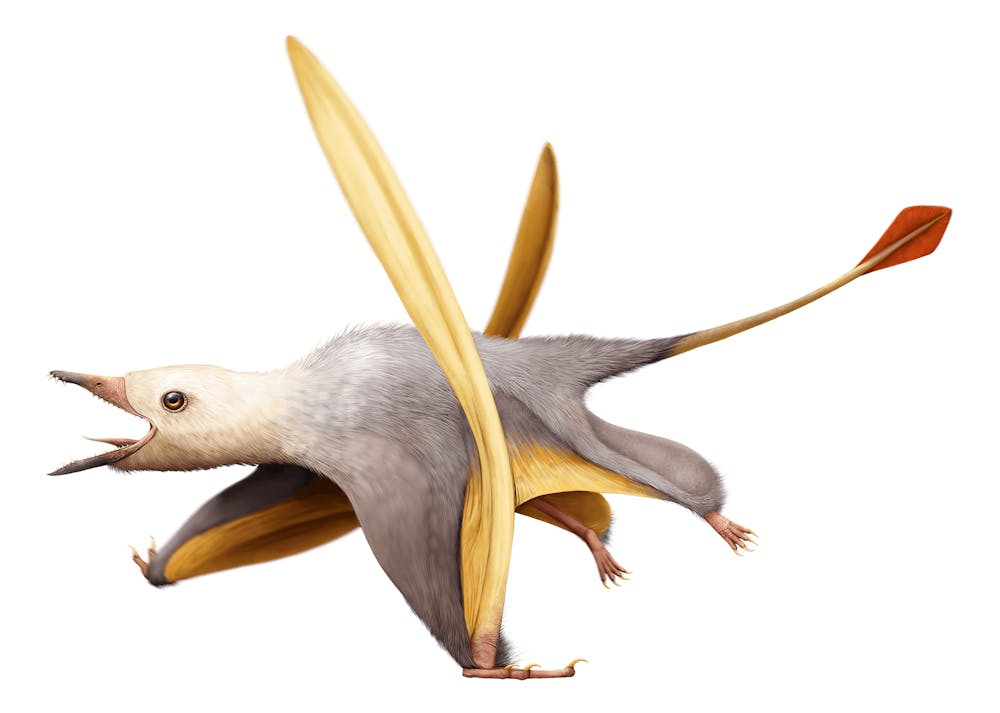 In 2019 paleontologists Fabio Marco Dalla Vecchia named and described a new pterosaur, Seazzadactylus venieri. It’s known from a single, mostly complete semiarticulated specimen on a single block of stone that was found as a boulder in the middle of the Seazza Brook near the town of Preone, in northeastern Italy. The lithology of the boulder indicates that it came from the Upper Triassic Dolomia di Forni Formation. The skeleton was first discovered in the 1990s by Umberto Venier, and provisionally considered a specimen of Eudimorphodon, but wasn’t fully described until Dalla Vecchia’s 2019 publication. The genus and species names honor Seazza Brook and its discoverer.

The skull is largely complete, but disarticulated, missing small portions of the snout, the region before the eye, and much of the braincase and temporal region. When reconstructed, the skull is roughly triangular in profile, like many early pterosaurs, and would have been about 6 cm (2.5 inches) long.

The upper and lower jaws, and their corresponding teeth are almost completely known. There were four pairs of procumbant recurved, cone-shaped teeth present in the rostral end of the premaxillae, with no teeth in its rear half. Farther back in the upper jaw, the maxillae have 14 pairs of leaf-shaped teeth. All of the maxillary teeth, except possibly the first, are multi-cusped bearing between 3 and 7 individual cusps.

The teeth in the lower jaws are similar to those found in the upper: procumbant recurved cones near the ends of the jaws, with multi-cusped leaf-shaped teeth farther back. The first two pairs of mandibular teeth were cone-shaped, and may have interlaced with the upper teeth when the jaws were closed. After the second tooth, there is a short gap, followed by 19 pairs of multi-cusped teeth, similar to those in the upper jaws.

The vertebral column is incompletely known, and preserves some neck, torso and hip vertebrae, but no tail vertebrae. Presumably, like all other early pterosaurs, Seazzadactylus had a long tail. The wings and shoulders are almost completely preserved, missing only the distal portion of the last wing finger phalanx. The hips and hindlimbs are less well preserved. In life, this individual had a wingspan of about 60 cm (2 feet), but was not yet fully grown.

Early pterosaurs with multi-cusped teeth may have had a varied diet including fish, small terrestrial vertebrates, and insects. When Seazzadactylus lived, about 215 million years ago, much of Europe was tropical, and its remains were found in deposits formed in a lagoon.