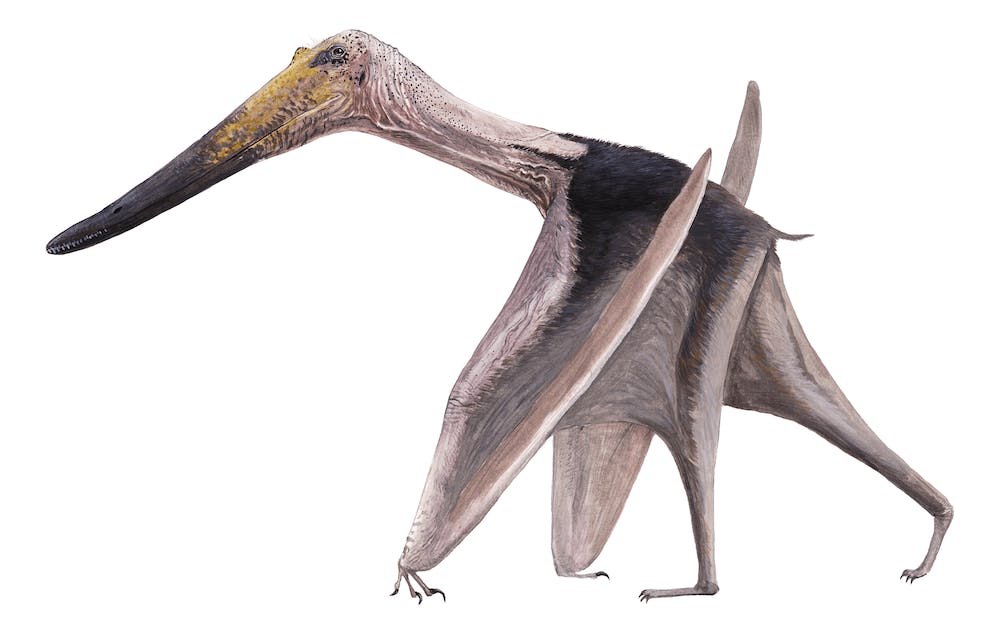 In 2020, paleontologists David Hone and colleagues named a new genus and species of istiodactylid pterosaur, Luchibang xinzhe. It’s known from a single, articulated, and nearly complete specimen from the Lower Cretaceous Yixian Formation in the Inner Mongolia Autonomous Region of northeastern China. The generic name is derived from the Mandarin words “lu” meaning heron and “chibang” meaning wing. It is also meant to honor pterosaur paleontologist, Lü Junchang, who passed away in late 2018. Luchibang therefore means both “heron wing” and “Lü’s wing.” The species name, xinzhe, is also derived from Mandarin, and translates to “walker.”

The skull is largely complete, missing only the rear-most portion, with an estimated length of 26 cm (10 inches). In profile, the skull is long and tapering, with a rounded termination and slightly upturned tip. Like other istiodactylids, the nasoantorbital fenestrae, a large opening housing the nostrils and large facial sinuses, is one of the most conspicuous features of the skull, being at least 20 cm (8 inches) long. On the upper surface of the skull, just before eyes was a low rounded mid-line crest.

There were about 12 pairs of teeth in the upper jaws, and 12 in the lower jaw. They were all fairly uniform in shape, being robust cones of about 5 mm. They’re restricted to the anterior-most 5-7 cm of both upper and lower jaws, being fairly closely packed near the tips of the jaws.

Luchibang is one of the only istiodactylids known from a largely complete postcranial skeleton. Among other features, Luchibang can be differentiated by its comparatively long femur and legs. The leg to humerus ratio is more similar to azhdarchoids than to other istiodactylids, suggesting it may have spent a greater part of its time on the ground than its close kin. The long legs might have made the wings less narrow than other istiodactylids. The only known individual of Luchibang had a wingspan of about 2 m (6.5 feet), but features of the skeleton indicate that it was a juvenile and not yet fully grown.

Istiodactylids like Luchibang are usually thought to have been terrestrial carnivores or scavengers, although this specimen actually has the remains of two fish within its abdomen, suggesting that its diet might have been more varied. When Luchibang lived, about 125 million years ago, this part of China was a lush temperate forest with numerous lakes and rivers.