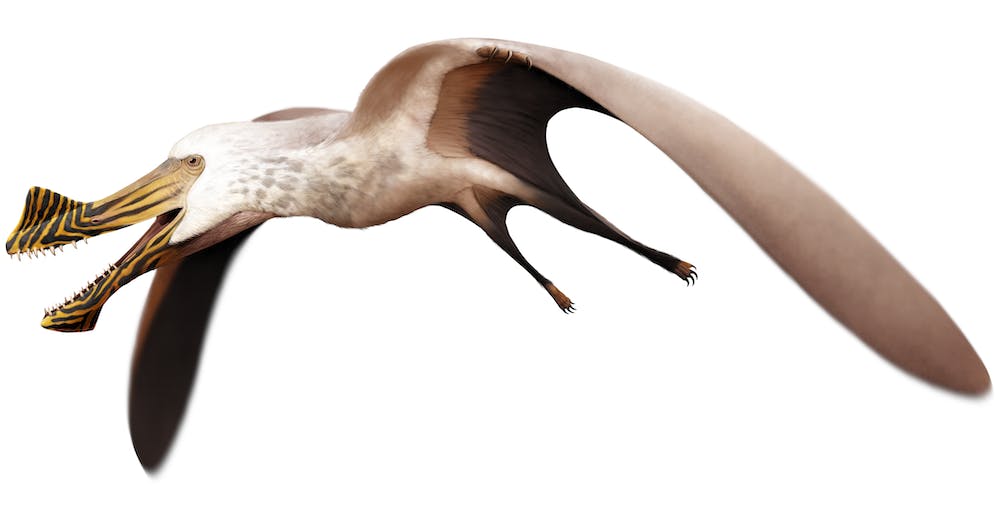 In 2019, Adele Pentland and colleagues described a new species of ornithocheirid pterosaur, Ferrodraco lentoni. It’s known from a single, partial specimen from the Upper Cretaceous Winton Formation of Queensland, Australia. The genus name translates to “iron dragon,” a reference to the ironstone preservation of the specimen. The species name honors Graham Thomas “Butch” Lenton, the former mayor of Winton Shire.

The skull is known from the distal snout with fragments from near the jaw joint and region around the eye. The rostrum is very narrow at its distal end, without any lateral spooning like some ornithocheirids. It bears a large crest near the end of the jaws with a semi-circular or rounded triangular shape. The distal end of the lower jaw bears the base of a crest, but it’s been eroded and its shape is unknown.

It’s teeth are slightly curved cones, somewhat widely spaced along the jaw. The first pair of teeth in the upper jaws are small and slightly elevated compared to the other teeth. Teeth in positions 3 and 8 are larger than those in positions 4-7.

The remainder of the skeleton is incompletely known, consisting of portions of neck vertebrae, parts of the right shoulder, and much of the left wing. Like many ornithocheirids, Ferrodraco had a relatively short neck, and long narrow wings. When alive, Ferrodraco is estimated to have a wingspan of about 4 m (13 feet).

Almost all ornithocheiroids are thought to have been aerial fishers, and Ferrodraco is no exception. Unlike most ornithocheiroids however, Ferrodraco lived in a terrestrial environment, and probably fished in rivers and lakes. Most other ornithocherids, including its closest kin, were marine fishers.